“I love French. He’s super fun. He showed me a lot of love.”

NeNe Leakes confronted the rumor about her stepping out on her husband, Gregg, with a famous rapper.
During a virtual appearance on Wednesday’s “The Real,” the former “Real Housewives of Atlanta” star was asked about her relationship with Gregg and if she was having a tryst with French Montana. 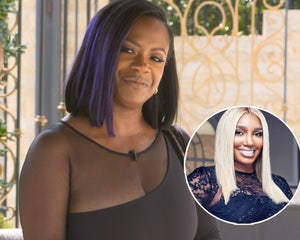 “NeNe, you are always making headlines,” began host Garcelle Beauvais. “Have you heard from French? Is this true? Give me the details. Give me the tea.”

“Honey,” NeNe, 52, began with a laugh. “Light-skinned French Montana? Honeeeey. Not my type, ok? I love French. He’s super fun. He showed me a lot of love, but he’s not my type of guy.”

“So I didn’t get a chance to cheat on Gregg. Dang,” she quipped. “No, there’s always rumors about me doing something.”
Nene and Gregg met in 1996 and were married six months later. They welcomed son Brentt in 1999. In 2011, they divorced, only to reconcile a year later and remarry in 2013.
“When you’ve been with somebody as long as I’ve been with Gregg for 25 years, you know your mate, you know what they will do and what they won’t do,” she said on the show. “Like Gregg, I know his type and I bet he knows mine. And with French Montana —  I think Gregg would be like, ‘Chile, bye.'”
In April, NeNe shut down rumors that she and Gregg had an open relationship after it was brought up on her most recent season of “RHOA.”
“I think the reason why people think that is because first of all, they see there’s an age difference between Gregg and I, but what they have not considered is that I’ve been with Gregg since I was 28 years old and he was young,” she explained to Extra. “So I think they feel like, well, now that he’s gotten a bit older, are they doing anything in the bedroom? Well, the answer to that question is —  we’re doing a lot in the bedroom.”
“I am a flirt and my husband knows that I’m very open about it,” she added. “I like to flirt. But I’m not sleeping with these men. And my husband is very much okay with that.”