Following her shocking suicide attempt earlier this year, Tamar Braxton has been fully committed to completely changing her life—and she’s giving Taraji P. Henson some of the credit. After she recently appeared on Taraji’s new talk show, Tamar took to her Instagram to thank her, courtesy of a lengthy and heartfelt message.

In the latest episode of Taraji P. Henson’s new Facebook Watch talk show, “Peace Of Mind With Taraji,” she sat down for an in-depth interview with Tamar Braxton regarding her suicide attempt this past summer. At one point in the show Tamar revealed that she decided to attempt to take her own life because she believed her 7-year-old son Logan was “better off without her.”

“Logan was the reason why I made that decision. I just felt like he deserved better. I felt like I was embarrassing him, being a fool on TV. I didn’t want him to be embarrassed in front of his friends. Here is this loudmouth ghetto mama,” she said.

Well now that the show has aired, Tamar wanted to thank Taraji for her kindness and understanding by writing the following on Instagram:

“Dear Taraji, Thank you. Thank you for not only having me on your show but creating a safe place to tell parts of my story so others can see the signs that I didn’t see. I was so jacked up back then, that I had no idea that It was ok to feel. You have to feel So you can heal. Many may see this interview and think “ 🙄here comes Tamar again”. But, that’s not what you saw. You said “I can’t wait to see her so I can hug her”. 😊You and Traci prayed for me. And cared for me and most of all SAW me. You knew that I was going through a tough time this summer. I was so broken I didn’t know what area to fix first.”

“You started this show and foundation because you know many like me was embarrassed, ashamed, and lost And had nowhere to turn… I’m so proud to be apart of such a powerful conversation that you have started. THIS show isn’t about being entertained. It’s about being informed. Thank you for the opportunity to keep me under construction 🚧 and while others watch, may they go and get the help they need to feel and be healed and be seen like me. Thank you for this #peaceofmind I love you, my sister ❤️ .”

Tamar is also currently documenting her healing process on her new podcast, “Under Construction With Tamar Braxton.” 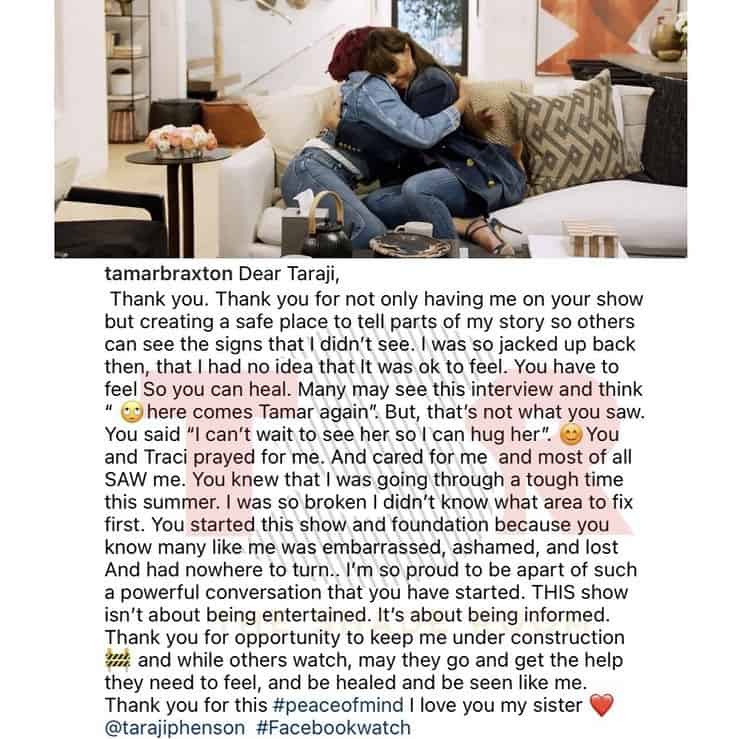