Skip to content
You are here
' during Chiefs game

A new angle capturing the Trey Songz fight at the Chiefs game shows a long discussion with the cop … and it looks like the singer threw the first punch.

Kansas City Police posted the footage, apparently from a security camera, which they say shows Trey and a few of his buddies in the stands being approached by stadium security 3 different times … before the KCPD officer was called to intervene.
Check out the clip, they arrow Trey each time — pointing to the guy in the black hoodie and black hat … which Trey was wearing in the close-up footage we have of the fight.

You see Arrowhead security come over to talk to him, and the first guard even looks like he’s flashing a mask gesture to the group … presumably telling them that they gotta mask up. A couple other guards come by to talk to them, but the group doesn’t appear to follow orders.
Finally, when the KCPD officer shows, he talks to Trey for about 90 seconds … and then walks around to try escorting Trey out of the section. The singer backed away down the row, before swinging or shoving the cop … and then it was total mayhem. 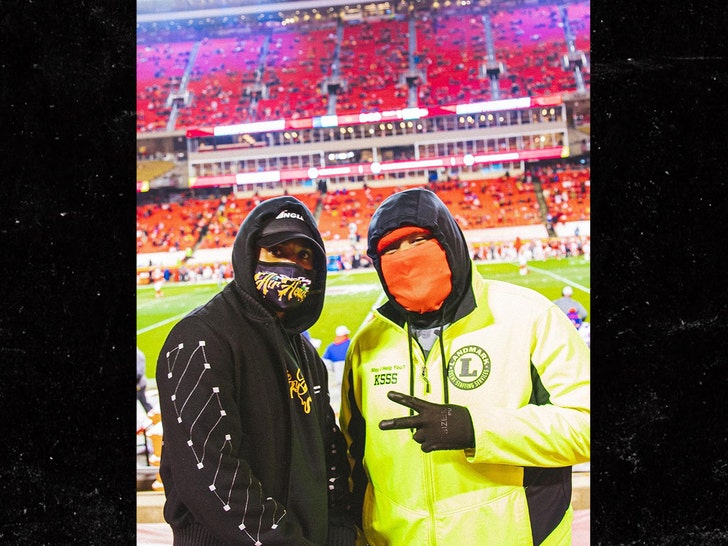 @onixxphotos/instagram
You’ve seen the rest … Trey and the officer wrestled in the seats, and Trey even had him in a headlock for a bit. Finally, as backup arrived to assist, Trey was arrested and hauled off to jail. He was booked on a handful of charges, including assaulting a police officer.
Remember, KCPD says the whole thing started because fans were asking Trey and co. to put on their masks — something Trey actually did at one point while he was in the facility, next to security no less — but it looks like it eventually came off.
Trey appeared maskless during each interaction with security and the cop. His camp has said the officer had it out for him from before the fight. Nothing in this new video appears to support that.